There are people you come in contact with every day that spend a few hours  each week making a difference in their communities. Some of these good people are part of our team of hospice volunteers. Hospice patients are cared for through a team-oriented approach of medical care, pain management and both emotional and spiritual support. A hospice volunteer can come from any walk of life, but each plays an invaluable role in providing support to our hospice patients and their families. Let me introduce you to three great volunteers on our hospice team. 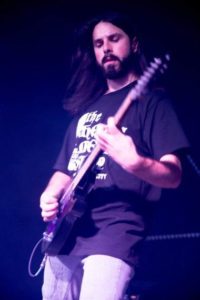 Jordan, a lead guitarist for a local rock band, was being a supportive boyfriend by going with his girlfriend to a student job fair at a local university. His girlfriend, who is a Certified Nursing Assistant (CNA), told him that there would be free stuff and all the candy he could eat. At the fair, they stopped by a Hospice and Home Health table to enquire about a CNA position for his girlfriend; however, it was Jordan who had the more detailed conversation with the booth staff about hospice volunteering and he ended up giving them his contact information. A week later, he found himself sitting with the company Volunteer Coordinator and began his training to be a hospice volunteer.

As a musician, Jordan clearly enjoys music and he also likes to travel. He was paired with a man who had just retired and was getting ready to sail around the world with his wife in their sailboat. After their maiden voyage, his wife started to notice that something was wrong with her husband. He was diagnosed with Frontal Lobe Dementia and was declining quickly. Living with someone with this type of dementia can be very exhausting. The patient’s wife found a support group that met once a week, but she needed someone to stay with her husband while she was away. Jordan met with the couple and they became fast friends. People with this type of dementia, unlike Alzheimer’s, usually retain their memory. Still, it can make them act like a completely different person than the one their loved ones know. Jordan spent several hours a week with him while his wife attended the meetings. During their time together, they would look at nautical maps of places that they had sailed. This simple act of sitting down to share memories enhanced the quality of life for both of them. The disease progressed very quickly, and Jordan only had a few months to share with him. Jordan was grateful for the friendship that had formed and felt this connection enriched both of their lives. 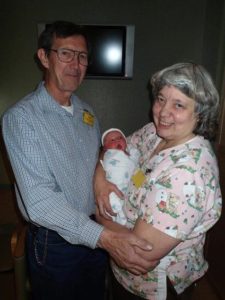 Lynette and Rick are a semi-retired couple who started volunteering because of the experience they had while Lynette’s mother was on hospice care. Lynette refers to her mom’s hospice team as “her angels.” She says that she wouldn’t have known what to do without their loving care. They became a part of her family.
Lynette and Rick wanted to give back just a small portion of what they had received. They have a soft spot in their hearts for our veterans and were assigned to a woman at the local VA nursing home. The woman had made her life in the military and served in many major conflicts around the world. She never married, or had children and had few living relatives. She was not easy to get to know at first, but Lynette and Rick visited with her weekly and, over time, created a strong bond.
To qualify for hospice services, patients usually have a life expectancy of six months or less; however, as long as the patient is declining according to their diagnosis, they can still qualify for hospice services. Lynette and Rick were able to build a relationship of almost three years with their newly “adopted mom,” as they would come to call her. When a person is near the end of life, it can feel like a roller coaster with its ups and downs. Lynette and Rick were able to share many of those times. Their joys were her joys, and her sorrows were their sorrows as well. Little trinkets, pictures, flowers, and cards were brought on each visit. She adored these presents and displayed them proudly. She had pictures of Lynette and Rick’s grandchildren; she felt like they were hers as well. When the time to say goodbye came, tears were shed and hearts ached. Lynette said this is how she knew how much a part of each other’s lives they had become. 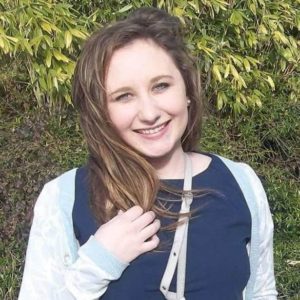 Sometimes we do things that we don’t think we will enjoy. Then sometime during the journey, you don’t know how you ever lived without this experience in your life. This is what happened with our last hospice volunteer, Madeline, or Maddy for short. Maddy was in a pre-nursing class that required a paper written about interacting with patients. The university where Maddy attends has a student service center that led her to becoming a hospice volunteer.
Maddy was paired with a lady who lived in a facility for patients on a very tight budget. The patient had a very high spirited personality and really wasn’t sure if she belonged on hospice services. This is very common with patients; they go through a series of feelings from anger, to denial, and then acceptance about their condition. At some point in her life, she had a falling out with her family and children. As a result of this, she had very few visitors and spent most of her time alone in her room. She loved to cook, but was not very impressed by the quality of food at the facility. She started saving her lunch and dinner in a small refrigerator in her room. When Maddy came to visit, they would “repurpose” the ingredients into new recipes that were to their liking. They ended up having a wonderful time together.
The deadline for Maddy’s paper for her class came and went. She didn’t need to come visit any more, but something had changed in her heart. She wanted to be there. Instead of visiting just once a week, she started coming three or four times a week. She became one of the favorite people of the staff and other residents at the facility. When the time came for Maddy’s friend to pass from this life, she was there, peacefully holding her hand as she took her last breath so she wouldn’t be alone. Maddy said, “I wasn’t sure if I was strong enough to do this,” but her capacity to love and share her life, gave her the strength to be there for her sweet friend.
We may all tell ourselves, “I don’t think I can do this,” be it for whatever reason. However, our ability to share our hearts increases as we share in others’ lives. Through their service, these volunteers have become the unsung heroes of patients on hospice and their families. There are thousands of people who quietly and selflessly go about serving those who truly need our help. Our world is in need of their example of service. We invite you to become a hero to a person in need. To become a hospice volunteer, please fill out our volunteer application.

Advice from a Special Patient
December 30, 2019

What is hospice volunteering really about?
July 25, 2019